It included monthly reviews on ten properties each month considered most vulnerable to Cuckooing, the vulnerable residents would then be visited and asked to co-operate and allow STAR Housing and/or West Mercia Police to call at the property anytime. As a means of making the property less attractive to County Lines drug dealers the residents were asked to display a notice stating that they are at risk of eviction. The two year project culminated in obtaining a closure order on a property in Oswestry that was causing significant problems to the local community and had elements of both County Lines drug dealing and Cuckooing.

We were first alerted to the worrying rise in drug dealing/use around Oswestry in 2016, after which we learned of one property in particular that was suspected to be involved in cuckooing. Cuckooing is where organised crime gangs take over a property with vulnerable tenants using fear and often their addiction to drugs to make the tenants conform and allow drug dealing from the property.

We are committed to ‘building vibrant communities’ and found that the property in Oswestry and the anti-social behaviour taking place was severely damaging the community. The decision was then taken during to obtain a closure order on the property. ‘Operation Whistle’ was a multi-agency partnership and we were sure to include Shropshire Recovery Partnership to help with drug addiction treatment for the residents involved.

Housing Officer Sam Pugh and West Mercia Police began carrying out joint visits to neighbours who had been suffering from the effects of the drug dealing for some time. Through these visits they learnt of drug paraphernalia being left outside and the late night, noisy visits from their customers. They then served warning letters to the perpetrators which were all ignored, finally a closure order was obtained and the inhabitants evicted. Shropshire Recovery Partnership offered help to anyone suffering with drug addiction.

We are so proud of our team at Oswestry for winning this national award and helping keep STAR communities vibrant but safe. We are also very grateful for the time and effort of West Mercia Police and the Shropshire Recovery Partnership helping tackle a growing problem around the country.

Our Neighbourhoods Manager Martin Whitelegg who attended the awards evening had this to say “I am delighted that STAR housing has won the award for ‘Best Project’ at the Resolve Anti-Social Behaviour Awards 2019. This recognises our commitment to work with our partners to deal with the drug problems blighting our communities and the quality of life of our tenants” 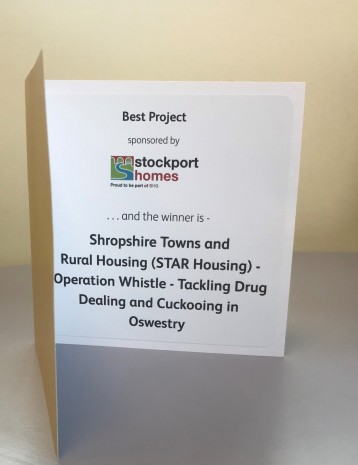